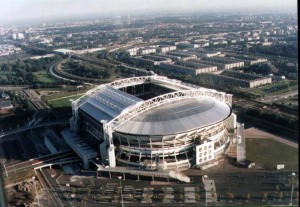 For the next couple of days whereisharald will be visiting Amsterdam. The first BIG activity is visiting the Amsterdam ArenA on Tuesday and watch the Champions League game between the two giants AFC Ajax and Real Madrid CF
The multifuctional stadium opened 14 august in 1996 and  is AFC Ajax home fortress.  When it opened it was the first stadium to have a sliding roof and has a capacity of 52 960 to be exact.

Other funny facts about the Stadium;
The lawnmower covers 14 km each time it cuts the grass.
The two moveable panels uses 18 minutes to close/open the sliding roof and weighs a stunning 520 tonnes.
It is 78 meters high.
There are two dismantled Alfresco screens, each weighing 13 tonnes. They measure 65 m2 and consists of 1,000,000 LED
61 083 is the spectators record and it didn’t happen at a football game, but a Celine Dion concert in 1999.

Watch out for updates and more videos:)