Figures that the  Aftenposten ( Norwegian newspaper ) has gathered from the Auditor General’s office show that 61,970 flights were delayed last year. In addition, 17,784 flights where set. Number of aircraft is set more than tripled since 2003.
Avinor and the airlines blame the bad weather at the delays, but the weather is the only one in ten delays. 74 percent of the delays caused by problems in the airlines, such as technical problems and lack of personnel. 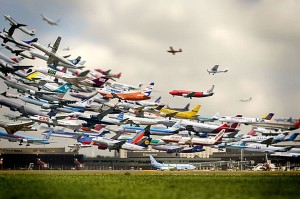 Avinor is responsible for 12.5 percent of delays, a doubling since 2003. Since then, punctuality fell from 89.5 percent to 86.1 percent. It is far below Avinor’s own goals.
– Avinor got to clean up. It is alarming that the number of delays Avinor is responsible for, have doubled in five years, says leader of Parliament’s transport and communications committee Knut Arild Hareide (KrF).
Avinor and the Department of Transportation, however, owe the airlines. They show that the companies have added up to far more closely programs to save money.
The airlines are on his side, according to Avinor internal customer surveys “little satisfied” with how Avinor operates the country’s airports. Auditor General says in part that there has been insufficient control over spending.

– Auditor General has pointed out some areas for improvement in Avinor. Several of these have already started, “says CEO Sverre Quale in Avinor.