In about a month ago something strange happened at Pier 39 in San Francisco harber. Almost all of the Sea Lions (1500 in total) that where counted last month by marine scientists, just disappeared and there had been no sign of them for a month.  Some of the Sea Lions preferred to stay but they are almost by themselves. Marine scientists say that it’s normal for some of the animals to  leave but not that many at the same time. 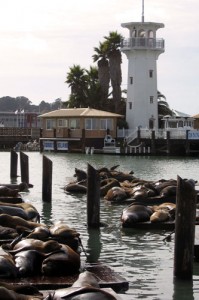 The disappearing of the Sea Lions, which are almost as famous as the Golden Gate Bridge and the city tram has been puzzling  locals, tourists and the scientist. It’s over twenty years ago since the Lions just appeared in San Francisco and took their residence at Pier 39.

But now there’s been sign of a large group of Sea Lions off the coast of Oregon further north. The bulk of the herd probably followed their favorite foods, sardines and anchovies and will probably return in the spring when their big food sourse returns.